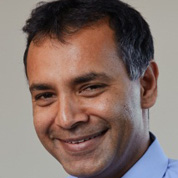 Professor Shabir Madhi is Executive Director of the National Institute for Communicable Diseases, Professor of Vaccinology and Director of the MRC Respiratory and Meningeal Pathogens Research Unit at Wits. He also holds the position of DST/NRF SARChI Chair in Vaccine Preventable Diseases. Professor Madhi completed his undergraduate and postgraduate training at Wits, qualified as a paediatrician in 1996 and obtained his PhD in 2003.

He has been involved in research on vaccine-preventable diseases and on infections in HIV-infected children for 17 years. His research demonstrating a reduction in childhood morbidity with the use of pneumococcal conjugate vaccines (PCVs) and rotavirus vaccines prompted South Africa to be the first in Africa to introduce these vaccines in national immunisation programs. These studies also contributed to the WHO recommending the introduction of these life-saving vaccines into public immunisation programs globally.

Professor Madhi has contributed to nine book chapters and over 200 peer reviewed articles in international journals, including five in the highest ranked medical journal globally, the New England Journal of Medicine. He received a number of national awards for his research, including the NRF President’s Award for Transformation of the Science Cohort (2009), the T W Kambule NRF-NSTF Award: Senior Black Researcher over the past five to 10 years (2010), Vice-Chancellor’s Award for Research at Wits (2010) and the Medical Research Council: Life Time Achievement Award (Platinum Medal) (2013).

He was awarded an A-rating (internationally recognised) by the NRF in 2011 and was listed as being among “100 World Class South Africans” by City Press in 2013. He is also the immediate past-president of the World Society of Infectious Diseases and has served as a consultant to the World Health Organisation (in the fields of vaccinology and pneumonia) and to the Bill and Melinda Gates Foundation (on pneumonia and is member of its Scientific Advisory Committee).